Given the increasingly widening range of games classified as “serious”, we have chosen to analyze serious games by the topics they cover, not the mechanics they use. In addition, in the course of this series, we will also discuss how serious issues are treated in mainstream games compared to titles traditionally presented as serious games, and the relative engagement potential and educational value of both approaches.

The first topic we will be covering is how Disease and Disease prevention are treated in a variety of games, including Oregon Trail, Plague Inc, World of Warcraft, and a number of university-hosted educational games.

If one was born in the 1980s, one has probably played Oregon Trail at some point in their life – and quite probably has had a party member die of…let’s say dysentery. 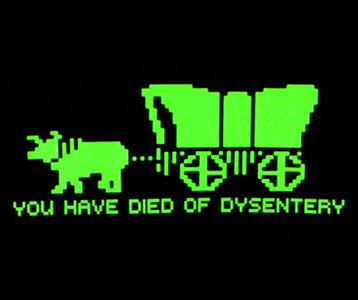 In case you’re unfamiliar with dysentery, its a disease of the gut that causes a victim to suffer bloody diarrhea, which can be fatal in the rough conditions of the wilderness. Granted, its rarer these days thanks to improved sanitation (you get it from contact with feces-contaminated water, food, objects), but 130 million people around the world still suffer from it each year, with almost a million deaths.

Now think back to the primitive conditions of the Oregon Trail, where there were no bathroom facilities, no running water, no knowledge that washing your hands could prevent disease – and suddenly, dying of dysentery doesn’t seem so outrageous.

Or deaths from illnesses that didn’t quite become a meme, like the cold, alkali sickness, or scurvy.

Oregon Trail, as a game, isn’t meant to give the player an education on the entire matter of dysentery, its causes, and how it spreads — and its stronger for it. 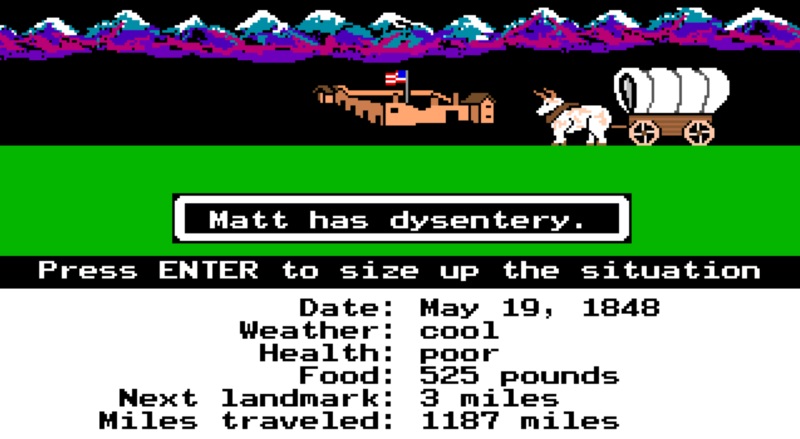 What makes the Oregon Trail work is its focus on educating the player about the experience of travelling the Oregon Trail, its hardships, and the difficulties faced during these travels. By showcasing disease as one of several of these hardships, the status of the (omnipresent) diseases your party members suffered became memetic, earning a legendary status that persists on online forums, T-shirts, and all sorts of video game memorabilia.

This is important, because while Oregon Trail only sets out to expose its players to a fairly limited series of educational goals, it succeeds rather well on these by making it part of the experience — it is learning done by exploring the game, not by simply dumping information at the player.

Plague Inc, a modern mobile game, takes a different tack, giving the player control over the development of a pathogen whose goal is to wipe out all life on earth. Granted, that’s not quite how diseases work, but it makes for a fun game. 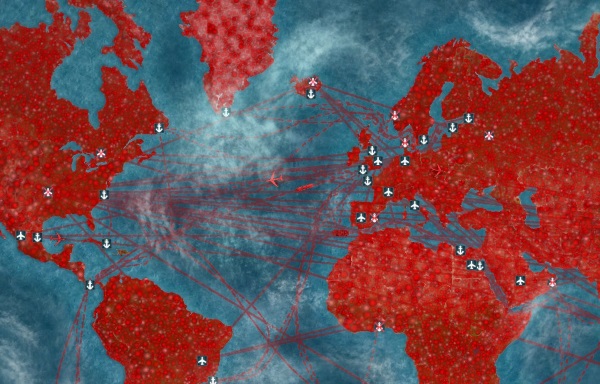 In Plague, your goal is to wipe out humanity, choosing the type of disease you wish to be, with advantages and disadvantages to each — viruses mutate more quickly, bacteria are all-rounders, and so on.

By evolving your disease to feature increased transmission rates, improved resistance to the elements, and various symptoms, you attempt to wipe out humanity before humanity discovers a cure to your disease, as well as a vaccine.

One of the great things this game does is allow you to learn what truly makes a dangerous pathogen by making your goal to make a dangerous pathogen. As a player, you rapidly learn that creating an incredibly obvious disease with tons of symptoms leads to humanity taking a rapid interest in your disease — and investing a ton of effort to curing it before it can become a threat. Likewise, making an extremely large fatality rate makes your disease likely to kill faster than it infects people, which makes your disease threat self-terminate before it can wipe out humanity. 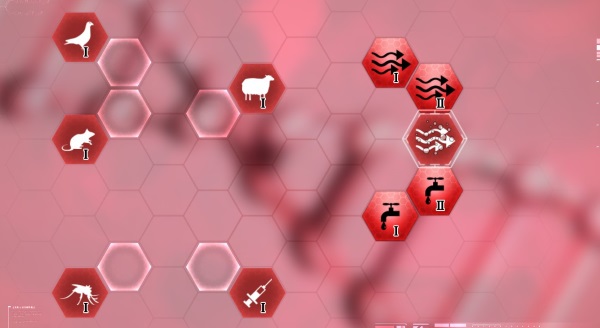 Players learn that the easiest way to make a dangerous pathogen is to “fly under the radar”, so to speak, with minimal symptoms and almost no fatalities, until your disease has infected almost everyone, before mutating to feature a larger fatality rate (similar to the Spanish Flu).

In fact, the incredible thing is this game allows you to learn this without ever giving you an essay on how disease works — it simply lets you explore and you are allowed to learn these lessons on your own.

You’re probably wondering, “What the hell does World of Warcraft have to do with disease?” Well, to answer that question, we have to turn back the clock by almost a decade, to the introduction of the Zul’Gurub instance, a 20-man raid where players were tasked with defeating Hakkar the Soulflayer, the dread Blood god of the Trolls, who had gained access to the physical plane and now sought to devour the blood of all mortal creatures.

But the true terror of Hakkar wasn’t that he could cast fearsome blood magic and decimate parties – it was that one of his abilities, a certain life-draining (and highly-contagious) spell called Corrupted Blood, was not limited to use in combat – and persisted on pets and minions long after one left the dungeon.

Getting hit by this once drains ~3000 HP. And there’s no immunity.

Players whose pets were hit with the debuff would dismiss their creatures to prevent it from spreading to the rest of the party. But on leaving the dungeon and summoning their pets again (usually in the safety of a city), they quickly learned that the spell had not faded, with the affliction spreading to all players within a certain radius – and then spreading from them to others and so forth.

Unsurprisingly, a pandemic soon ensued, with Corrupted Blood killing low-level characters in seconds, and annoying higher-leveled ones, as getting it twice in a row – if one didn’t seek healing or take potions – would invariably be fatal. Worse, traditionally accepted safe zones – like the cities – became death pits, due to the sheer concentration of players, with low level players dying, respawning, dying again almost instantly if someone infected was in range, and so on and so forth, unable even to take off their equipment to prevent wear and tear from death. 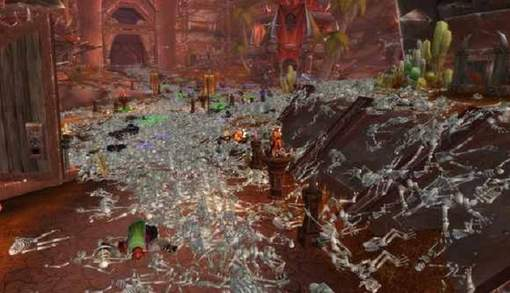 For days, carpets of skeletons riddled the highest populated towns, with the great cities of Azeroth rendered uninhabitable by the persistent plague. Blizzard tried many approaches to fix this, imposing quarantines about the cities, urging players to abandon the cities for a few days (or not log in), or in some cases, to form healing brigades to rescue who they could from the ruins, but these ended in failure, given that some players intentionally broke quarantines and exposed healthy populations to the Corrupted Blood plague.

Eventually, after millions of deaths, Blizzard was forced to reset the world to a time before the Corrupted Blood Incident, though the implications of the event remained. For the first time, epidemiologists, including the Centers for Disease Control, took an interest in the potential of virtual worlds both as possible laboratories of human behavior and as a possible means of educating people about disease.

So…with all this interest and attention from health professionals, what amazing products have been created to study disease – or teach people about disease?

…nothing from the serious games sector. While a good deal of grant money has been invested in the study and use of existing virtual worlds for purposes of education, producing interesting results, attempts to create stand-alone games generally result in badly programmed (and badly designed) web applications that are neither educational nor entertaining.

One of these games was a game called “Epidemic!”, a game developed by EduWeb and hosted by the University of Minnesota. The game has a good premise — there’s an epidemic going on, and you and a team of friends are to try and investigate the cause of the disease, identify it, and respond to it so that the epidemic is solved and controlled before it gets out of control.

The problem is that this game really, really fails to implement what should have been a fascinating concept. Unfortunately, the game is…web based. And I don’t mean it uses Flash or anything. I mean the whole thing is a gigantic web page.

Moreover, the game has some well done concepts, such as showcasing the whole team’s importance to handling an epidemic (each team member fulfills one of the roles, such as Epidemiologist, Public Health Officer, etc). The problem is…you aren’t really allowed to do anything until your team members finish the work you sent to them. You aren’t allowed to make progress, investigate something, or in any way interact with the game, other than simply leaving until something happens.

The educational aspect of this program can best be described as…decent? There’s nothing explicitly wrong with anything taught here, but the medium of teaching was far more traditional than it should have been for a game — most learning was done through text dumps as opposed to through gameplay — in fact, gameplay tended to be fairly tedious and felt more like office work than a game — in one “game”, you were supposed to sort through a list of symptoms, and find out which patients exhibited the common symptoms, in another I was seeing which DNA markers matched known bacteria that might be the cause — it was hardly compelling gameplay, to say the least.

This project is hard to even acknowledge as a game, given how it focuses more on education than anything resembling gameplay. The problem is, the educational aspect isn’t all too rich either, and the same material could have been learned through a much more engaging game. Truth be told, it actually feels like it’d be a pretty fun game to play in person with a host, perhaps in a formal setting like a team-building exercise. As it is, its just not tailored to its medium correctly.

The second game I saw was a game called Disease Defenders, a game hosted and developed by Rice University. This game admittedly met the qualifications for a game, being a reasonably well built Flash game.

However, the game felt strangely divorced from itself, with one section rather educational but not terribly fun, involving some math regarding exposure odds rates, and information that might have been fun in the proper context, but was boiled down into what devolved into an interactive flash lecture.

This game fell into the old trap of delivering a lecture and a game in separate packages, where the gameplay part is just a game with no educational content, and the education is just a lecture packaged in a flash animation.

Still, it was worth noting that of the two, this game actually taught me more, with a reasonably well executed flash lecture, as knowing near nothing about epidemiology before, I came out with a knowledge of 2×2 tables and exposure odds rates, which is more than can be said for “Epidemic!”.

As for the minigames, it is difficult to comprehend the thought process that went into such atrocities as a chicken themed, or a mosquito-themed whack-a-mole game, or what possibly could have been accomplished with such a thing. The minigames are best left ignored, if only for the sake of your own sanity.

And sadly, that’s kinda a wrap in terms of disease based serious games I could find. If you have any suggestions regarding a good serious educational style game we didn’t cover, feel free to give us a ring, and we might find a way to sneak in a revisit to this. Hopefully next time it won’t be so depressing.

One thought on “Serious Games — Disease In Games”